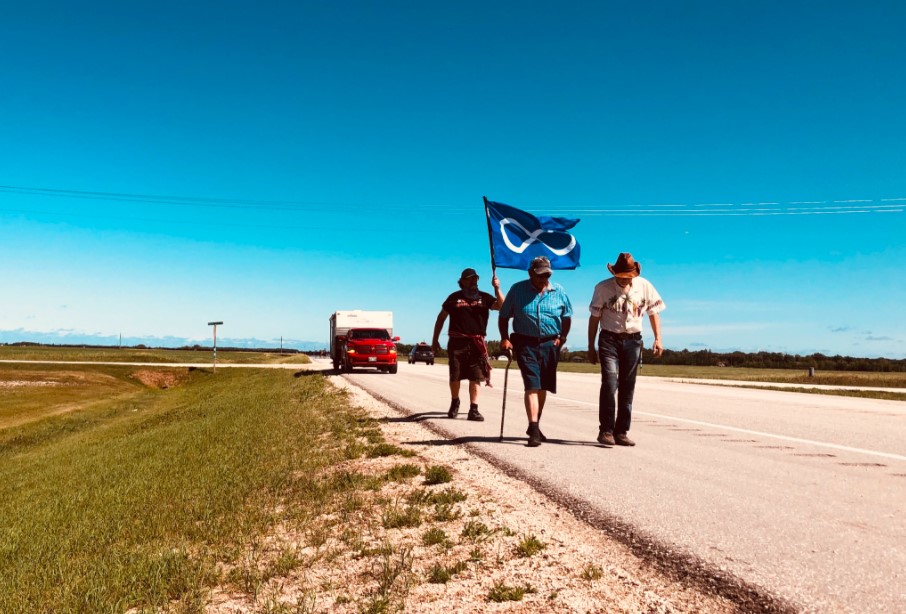 This summer, IPAM member and Métis Elder John Morrisseau set out to walk in protest against the continued discrimination of Métis peoples by the Canadian federal government. Between July 2 and 10, the 80-year-old Métis leader from Grand Rapids, Manitoba raised awareness and support for important Métis issues related to land claims, veterans and day school survivors while walking from Ashern to Winnipeg, Manitoba.

Elder Morrisseau covered as much as 182 km in 8 days, using the media attention and crowds he drew to emphasize the point that Métis people are continuously left out of critical conversations by the federal government. Specifically, in a press release issued to kick off his walk, Elder Morrisseau said his goal was to draw the federal government’s attention towards properly resolving three key issues that continue to be part of the narrative of Métis people today:

Using Twitter to share his progress, location and message, Elder Morrisseau invited followers to join him on his daily walks and in peaceful discussions of the issues he advocates for. Completing his walk on July 10 at the gravesite of Louis Riel in St. Boniface, Winnipeg, he told his supporters and the media gathered with him that he’ll keep walking and advocating for as long as it takes for the federal government to fully recognize the rights of Métis people.

No stranger to activism and advocacy on behalf of Métis people and communities, Elder Morrisseau served as Assistant Deputy Minister and Deputy Minister in the provincial Howard Powley NDP government. A recipient of the Order of the Métis Nation, Elder Morrisseau is also one of the founding members of the Manitoba Metis Federation (MMF). He served as president of the MMF from 1976–1981, leading the organization in its mission to address the issue of the land claim settlements for the Métis people.

Along with the Native Council of Canada, he helped the MMF file a major land claims suit against the federal government and the Government of Manitoba in 1981, challenging unfulfilled treaty promises made to the Métis people promising 1.4 million acres of land under the Manitoba Act of 1870. It took until March 9, 2013, but the Supreme Court of Canada eventually granted the MMF’s appeal and held that the federal Crown failed to implement the land grant provision set out in Act.

In his role at MMF, Elder Morrisseau also worked alongside Harry Daniels, one of the founding members of the Saskatchewan Métis Society, and the driving force behind the 2016 Daniels Decision, a landmark Supreme Court of Canada ruling for Indigenous People. The culmination of a 17-year-long legal battle between the Congress of Aboriginal Peoples (CAP) and the Government of Canada, the decision has finally made clear that ‘the Canadian federal government is legally accountable for Métis and Non-Status Indian interests’. According to the Congress of Aboriginal Peoples (CAP), this means that for the first time in history, Métis and Non-Status Indigenous leaders know who is responsible for the other end of the dialogue on matters of programs and services, rights, land claims, and self-governance.

And yet, as Elder Morrisseau emphasized during his protest walk, despite these legal victories, there is still so much work to be done to now bring the federal government to the negotiating table in good faith and settle the many outstanding rights and concerns of Métis people.

Here at IPAM, we couldn’t agree more. These rulings have been essential steps forward for reconciliation. But we need to continue to gather together and speak out, youth and adult leaders alike, to unite our purpose into one clear, compelling, and influential message to the Government of Canada so that new discussions, negotiations and decisions can finally be made on land claims, access to education, health programs and other government services we are entitled to.

And though he is now retired in Grand Rapids, Manitoba where he lives with his family, Elder Morrisseau continues in his lifelong pursuit to foster pride for Métis culture while securing better programs, rights, land claims, self-governance and more for Métis and Non-Status Indigenous Peoples. He also currently serves on the 10-member Indian Residential Schools Survivor Committee, an advisory body to the Truth and Reconciliation Commission.

As Miles Morrisseau said in an interview with a local reporter at the completion of his father’s walk, he “is proud that his father has taken on the role as an Elder, leader and patriarch” adding that “there is never a guarantee about what the result may be but he has shown us, as an octogenarian Métis Elder, that you still got to keep fighting for the rights of your people”.

You can join the conversation with Elder Morrisseau, read about his walk, and follow him for future news and updates, on Twitter.

For more ways to get involved and be heard, become an IPAM member, follow us on social media and subscribe to our blog.